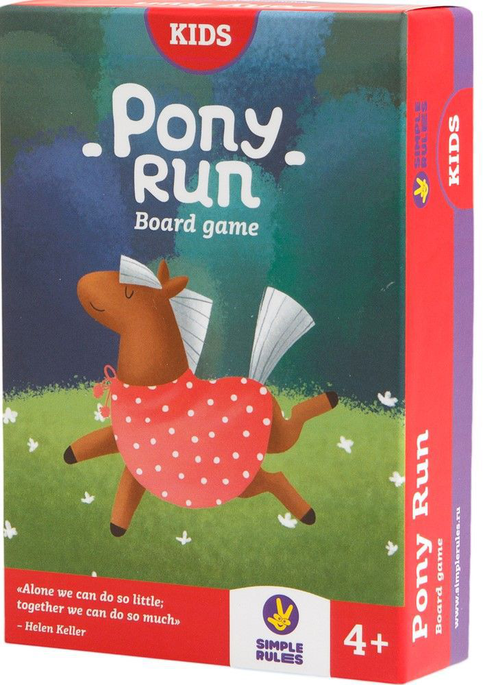 Pony Run is a children's cooperative game about ponies and real friendship. What's the game? Our lovely ponies have all wandered off somewhere. To get them back home, you need to work together! Players will need to cooperate, negotiate, share and learn to work as a team in order to achieve a common goal and win the game. What's unusual? The most novel thing about this game is the playing field, which is constructed by the players during the game. The card forming the shape of the paddock is a 7×7 square. The ponies and the hay go inside, filling out a 5×5 square. As soon as the outer perimeter of the paddock closes, the ponies can no longer walk out and the game is lost. However, if we manage to fill the 5×5 paddock with ponies and hay, then the game is won. Remember, the secret is to work together! How to play? During his turn a player needs to take two types of action – one prevents victory, while the other brings it closer. What prevents victory is the need to build the paddock by playing all the available fence cards in one’s hand. What brings it closer is putting 3 ponies which have some trait in common into the paddock or using the horseshoe to break two fence cards or adding one hay card into the paddock. Note that players can share cards to help each other collect the three ponies that they need. You can also discuss and plan moves together, as well as judge whether or not a certain action will be useful. The players are not competing, they are trying to win by working together. In order to win, the players need to fill the paddock with hay and ponies before the fence is completed. Otherwise the game is lost. Who can play? This game is ideal for children who are 4+ years old, as well as mixed groups of kids and adults and families. Great as a fun activity in day care centers, at parties and during trips.