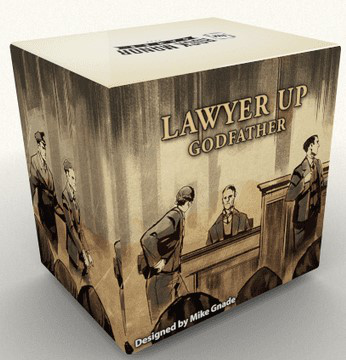 This case transports you back to Atlantic City in the 1920s where Carmine Monacelli is put on trial for conspiracy to violate the National Prohibition Act. Carmine is accused of operating a network of criminals involved in bootlegging, murder, gambling and more - but he's a powerful man in AC so it's going to take more than some Federal Prohibition Agents to take down this Godfather.

This expansion introduces a Dossier deck. As players win witnesses, they are able to reveal or discard the top card of the Dossier deck. The prosecution needs to prove Carmine's Mafia connections by revealing these Dossier cards while avoiding the powerful criminal activities such as "Jury Tampering" and "Swim with the Fishes" that the defense has shuffled into the deck.