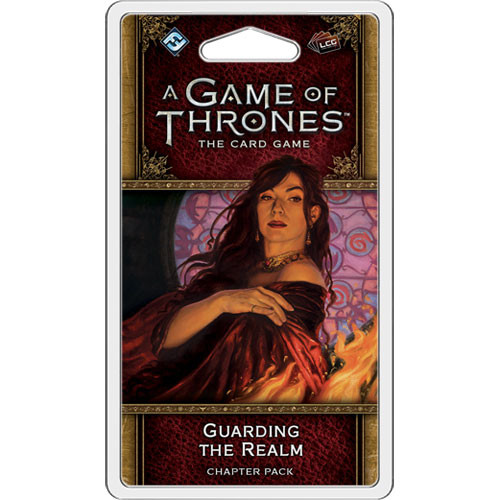 A Game of Thrones LCG Chapter Pack / Guarding The Realm

Guarding the Realm is the second Chapter Pack in the Blood and Gold cycle.Great changes are coming to Westeros, played out through countless smaller stories. Jaime Lannister has been freed from the prisons of Riverrun and makes his way towards King's Landing as a captive of Brienne of Tarth. Jon Snow has turned his cloak and fallen in with wildlings, while struggling to keep his true loyalties secret. Robb Stark fights to reclaim the loyalty of his bannermen, Daenerys Targaryen lays her plans to acquire an army of eunuchs, and Davos Seaworth returns to Dragonstone with a dream of assassinating the red priestess, Melisandre. Though the violence of the War of the Five Kings has paused, the intrigues and plots behind the scenes have never been stronger - or more dangerous.Return to Westeros with Guarding the Realm, a new Chapter Pack of the Blood and Gold cycle! As with the other expansions of this cycle, you'll be drawn into the events of A Storm of Swords. Gold has always been important in Game of Thrones LCG, and the ways you earn and spend it will soon become more plentiful than ever before, as you contend with the new bestow keyword and new economic options for every faction. And of course, you'll have the chance to add iconic characters to your deck, including Gilly, a new version of Melisandre, and a bastard son of House Botley, Wex Pyke.