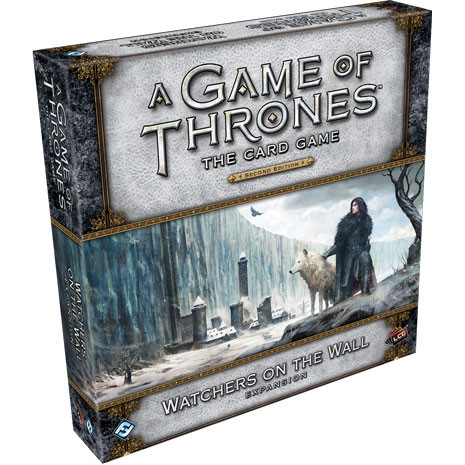 A Game of Thrones Expansions / Watchers On The Wall

While the Great Houses struggle for power in Westeros, the men of the Night's Watch stand vigilant on the Wall, shielding the Seven Kingdoms from the dangers that lurk beyond. For centuries, those sworn to the Watch have forsaken land and titles, pledging their lives to the service of the realm. Now, as a new threat stirs in the north, the realm needs the Watch more than ever. Join forces with the Night's Watch as they strive to defend Westeros!A Game of Thrones LCG (2nd Edition) is a two to four player game of intrigue, politics, betrayal and warfare based on the bestselling A Song of Ice and Fire novels by George R.R. Martin. The Watchers on the Wall expansion focuses on the Night's Watch, providing powerful new characters, events, locations, attachments, and plots to enhance Night's Watch decks. This expansion also features new cards for every other faction in the game, as well as a variety of neutral cards that can be used to customize and enhance any deck.Contents:156 Cards1 Rules Insert